On Saturday afternoon, I took my seat at McCoy Stadium and settled in for the first game of a double-header between the Pawtucket Red Sox and the Rochester Red Wings – the Minnesota Twins affiliated AAA club. Although down early, the Sox dug in and clawed their way back. Then in the bottom of the eighth, PawSox third baseman, and the only professional baseball player named after a pale Belgian ale, Jantzen Witte, creamed a home run over McCoy’s center field wall. The PawSox players emptied the bench to meet Witte at the plate. Then the game abruptly ended.

Confused? I certainly was. A walk-off home run at the bottom of the eighth didn’t make any sense and left me scrambling for answers. However, everyone around me seemed to understand what happened.

“We were in extra innings already,” said an older bearded Pawtucketerian, from over my left shoulder, obviously sensing my confusion.

“We were in extra innings?” I replied.

“Yes, there are seven innings in a double-header, so the eighth inning was extra innings.”

I wish I’d have known that earlier, I thought. 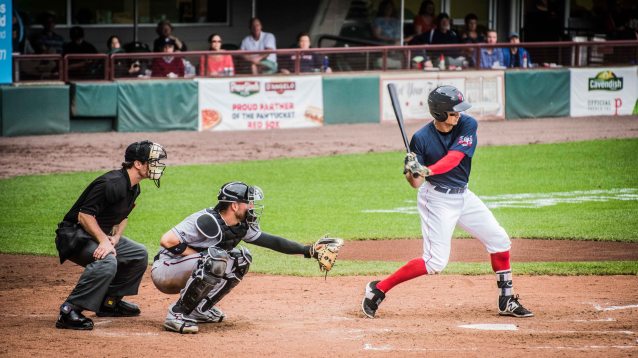 These two teams are no strangers to games of odd-length. On April 18th, 1981, the longest professional baseball game in history was played at this ballpark between these two teams.

A cold hard wind blowing from the outfield made it impossible for the teams to score runs even though the game came perilously close to ending in the 21st inning. With the score tied at a measly one run apiece, Mike Hart of the Rochester Red Wings drove in a run only for Wade Boggs to tie it up again in the bottom half. “I didn’t know whether the guys on the team wanted to hug me or slug me,” Boggs said afterwards.

The game continued long and deep into the night. It was cold and the players burned bats and wooden benches in the dugout to keep warm. Between innings, the umpires consulted their rule books in a vain attempt to find the rules that governed curfews. The general manager and PawSox office staff tried to contact the league commissioner at his Ohio home but to no avail. Finally, he was tracked down and woken from a deep slumber at around 3am. Horrified, he ordered the game to be suspended at the end of the current inning. Inning 32. The game ended at 4:07am, Easter Sunday Morning.

Only 20 people remained at the ballpark (including home plate umpire Dennis Cregg’s twelve-year-old nephew who’d fallen asleep on the seats behind home plate) all of which received lifetime free passes to future PawSox games. Twenty-five years later in an interview with the Washington Post, Dennis Cregg said his nephew refused to go to another baseball game.

The teams agreed to finish the game the next time the Red Wings were in town. It ended two months later in front of a sell out crowd and was over in just 18 minutes.