Imagine, if you will, a country whose government actually functions. A government, that has actually functioned for the last 25 years. That, believe it or not, is what it’s like to visit Berlin. Everything works. The parks are nice. The transit runs on time – it’s clean, convenient. The taxis have child seats ready for you to use. All around it’s so well thought through. Stereotypically, you could say that they only thing Germany lacks is a sense of humor, but that’s not true either. When we arrived at the airport, we (Des, Fiona, and I) stood in line at passport control (we all have British passports). The European Union line was ignored, so, after being beckoned by the agent we proceeded. She said, in really good English, “Why were you waiting?  You’ve got another two years. You’ve not left the EU yet!” which, undeniably, is quite funny.

Waiting to the take the plane at Manchester

Quick nap on the way to Berlin

Anyway, Berlin.  Love it. Fantastic place, great history – most of which (if you like geopolitical stuff) is contemporary. Loved Checkpoint Charlie and explaining it to Des. We went to the museum right there at Checkpoint Charlie and Des was actually riveted. There are lots of exhibits that show how people escaped from the East to the West – in suitcases, gas tanks, all kinds of stuff.  Well worth a visit, make sure you pay a bit extra for the audio tour. Then on the to the wall and the Brandenburg Gate.

Next day we went up the TV Tower to the rotating restaurant and had some fine German cuisine (curried sausage – don’t laugh, it was frigging amazing). Fiona had the same, and Des had Schnitzel. 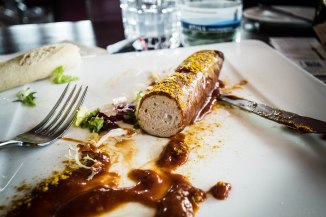 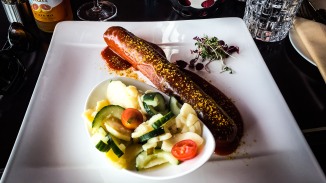 Then it was off to a bowling alley and then to Hauptbahnhof (the central train station) to catch the train to Paris, because that’s what you do when you travel in Europe – you take the train to another country.