The Battle of El-Alamein is known for two things – the world’s first(ish) tank battle, and, a solid win for the allies in the second world war.  It’s a little known fact that there were two battles of El-Alamein, and, the birth of the Full Monty is also somehow associated with that remote region of North Africa.

The Full Monty was not originally a movie, it doesn’t mean being stark bollock naked. It was actually the “invention” of the then-commander of the British Eighth Army, Field Marshall Sir Bernard Law “Monty” Montgomery (a Lieutenant-Colonel back then), who, whether at home or in battle, ordered a plate full of fried food for breakfast. Fellow soldiers called it the Full Monty. Eggs, bacon, fried tomato, everything you’d expect – which morphed into what is today known as the “Full English”. There are plenty of other explanations of the origin of the Full Monty, most as implausible this one, but it makes for a good story.

Anyway, the other morning, I was Jonesin’ for a Full English. Fiona and Des obliged, and we all set out to find a good Full English. We saw a couple of restaurants advertising to British tourists – Full English Breakfast served here! but Fiona and I both concluded that if Full English shared a place on a menu with fifty varieties of paella, it probably wasn’t going to be a Full English. The bacon wouldn’t be the right bacon, and something would be a little bit off about the black pudding. We needed to find one of those grubby little English pubs, run by a married bickering couple, probably Kevin and Doris, from Grimbsy, who thought it was a good idea to come to Spain but now find themselves working twenty hours a day in a dingy back street bar without air conditioning. Now, that’d be the proper full English. And not that there’s anything wrong with an augmented Full English, per se. Any country can make it their own. Fiona and I remarked on a Full English we saw on a Spanish menu that came with fries and a Spanish Omelette. No, no, no. No judgment, it’s not for me. And to be fair, there are variations within the home nations of the UK too. In Scotland, for example – the Scotch Breakfast has been known to include haggis – basically a sheep turned inside out and smushed into its own stomach, with all the mass of a collapsing quantum singularity.  A teaspoonful of which has the same mass as the entire city of Des Moines. There’s even a Welsh version, the unpronounceable Brecwast Cymreig llawn, served with laverbread. If you’ve never had laverbread, you probably shouldn’t. It’s literally seaweed scraped from rocks, and clearly has no place as any kind of food. Anyway, we found a place near our apartment and it was perfect. No cards, cash only. Just the way I like it. 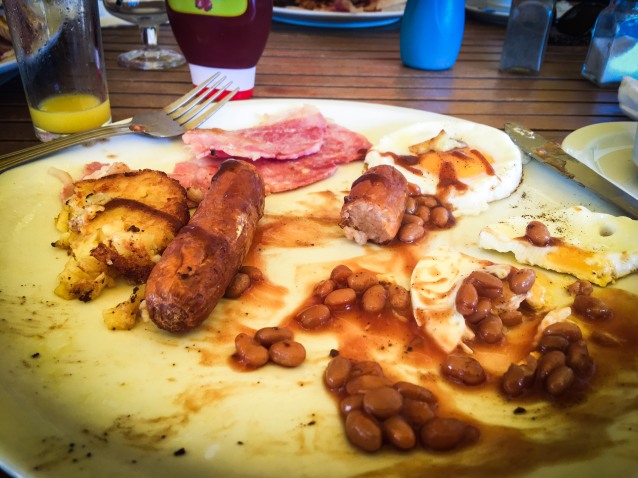 For my breakfast, I’d honestly have a Doner Kebab every single day – so I should probably keep my mouth shut.