It was an early start on Wednesday morning. Meet the guide at the hotel and then go to the Tiananmen Square, the Forbidden City and the Great Wall. Lots to do, lots to see. The highlight of the day was surely to see the wall.

There was a spot of early awkwardness. The tour group was relatively small, just Fiona, me, and a lovely honeymooning couple from Mexico. Yes, the gigantic elephant in the room here was that we were about to tour one of the world’s great walls with a couple from Mexico.

Okay, first things first. The thing about China (and I can write this now because I am in Japan) is that you feel that you are always being watched. I don’t mean someone hiding behind bushes, I mean everywhere you look there are police, soldiers, some kind of security. Everywhere. Every entrance to a train station or metro station, someone will x-ray your bag. From the perspective of a tourist in a city, I felt safe. It was, in a way, reassuring. But would I like to live under that? Absolutely not. So when our first stop was Tiananmen Square, there was a lot of security to go through.

I remember when the protests happened in 1989 – yes, even at 18 years old I was politically aware, and I thought, as did everyone else, that the protests at Tiananmen were to become unstoppable change. The protestors called the bluff of the government, and, well, we know what happened.

But of course all this is what I am thinking about as I walk across Tiananmen. And I know I can’t ask our guide because China doesn’t like anyone to talk about it. My dad will remember this, but as a kid I travelled with my parents to the Soviet Union and we wandered across Moscow’s Red Square. I was surprised at its size, not that it was big, but how compact it was. Remember the images of Breshnev waving at the passing SS20s over the square, it looked miles wide, but it wasn’t. And I was prepared for that at Tiananmen too, but Tiananmen is as big as it looks on TV.

Walking across the square, I heard a woman’s voice booming across a PA system in Mandarin. My western head immediately assumed that she was talking about the greatness of Chairman Mao, and be obediant to the People etc etc. When in fact she wasn’t, she was saying “Make sure you take your bag with you, stand in this line for the tomb. Ask your guide about daily specials. Be careful of pickpockets.” 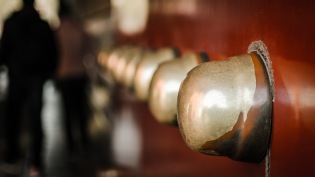 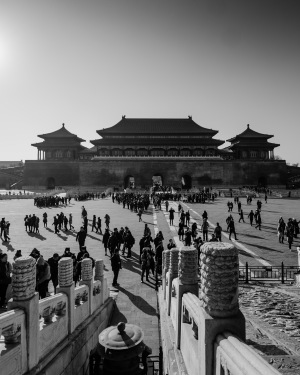 And then the wall. But before that – driving in China. This is an experience to cherish. Seriously, take any of the taxi drivers were hired in either Shanghai or Beijing, transplant them in Boston, and they could have you anywhere in five minutes or less. Driving in China is a national sport, a cross between Frogger and Tetris. There is nothing like it.

People warned us about the wall. It can be hit and miss. You may go and not see anything, or it may be crowded, or it may be snowy, icy. It was none of these, it was perfect. A cloudless sky and a view for miles. 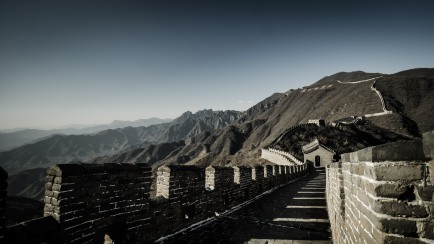 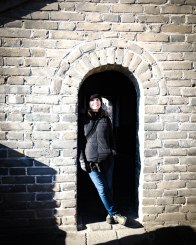